Skip to content
Snickerdoodles are weird little cookies.   Some people absolutely swear by them, others are more “meh”.   They’re basically soft sugar cookies with cinnamon sugar topping (anyone who thinks snickerdoodles should be crispy needs to be thoroughly spanked.   Unless they like that, then spanking needs to be withheld.

Anyway, getting back on track, I tried to figure out what the word “snickerdoodle” means.   I looked all over the interwebs and got lots of different answers.   I finally pulled this from Wikipedia:

“ The Joy of Cooking claims that snickerdoodles are probably German in origin, and that the name is a corruption of the German word Schneckennudeln (“snail noodles”), a kind of pastry.  It is also possible that the name is simply a nonsense word with no particular meaning, originating from a New England tradition of whimsical cookie names.”

So basically, that’s Wikipedia’s way of throwing up their hands and saying “heck if we know!”   And if Wikipedia doesn’t know, NO ONE DOES.

When it comes down to it, though, do we really need to know what the cookie’s name means?  No!   it just needs to taste good, and this one does.

Mix the shortening, butter, 1 ½ cups of sugar, eggs and vanilla until well blended.

In a separate bowl mix the flour, cream of tartar, baking soda and salt with a wooden spoon until they’re well mixed.   Add the flour mixture to the shortening mixture and beat until well blended.

In a small bowl mix the 3 T sugar and the cinnamon.

Roll the dough into balls – probably about the size of a walnut – and then roll it in the cinnamon sugar mixture and place on an ungreased cookie sheet, or a sheet covered in parchment paper.

Make sure to leave space in between the balls, as they’ll spread as they bake. 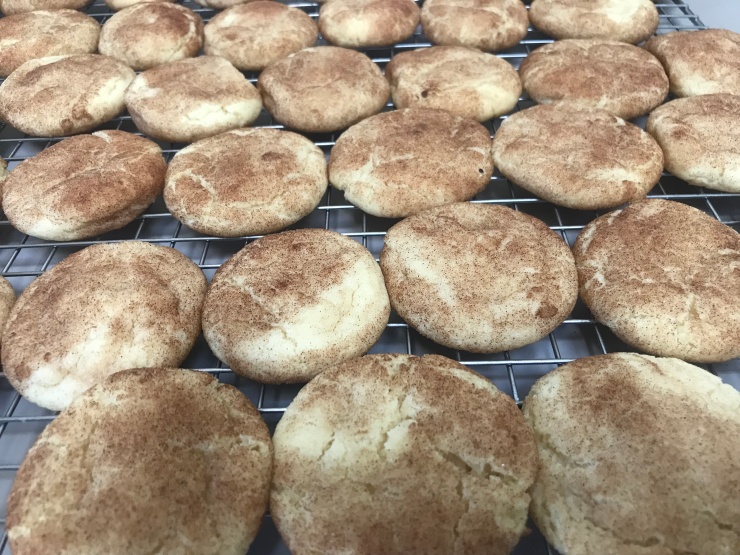